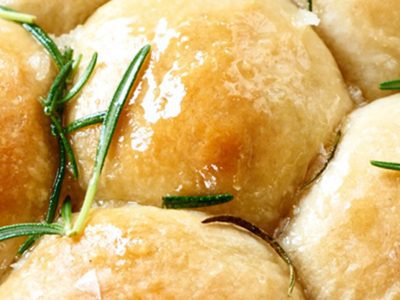 Dissolve the yeast in warm water and allow to rest for 5 minutes. Stir buttermilk and honey into the yeast mix, then add to the mixing bowl; add bread flour and salt.

Mix on medium speed for 2 minutes, followed by low speed for 3 minutes. After 3 minutes slowly add soft butter until it is completely incorporated. Mix for another 2 minutes.

Transfer to a mixing bowl and cover until the dough has doubled. Turn out and portion to 50g balls. Roll the balls and transfer to a lightly sprayed sheet of parchment. Spray the tops lightly with pan spray and cover with plastic film. Allow to double in size then remove film and bake on the EGG at 177-191°C/350-375°F until golden.

Brush with rosemary butter and sprinkle with sea salt to taste.

In the bowl of a stand mixer fitted with a paddle attachment begin beating butter of medium-low speed; add the chopped rosemary to taste. Scrape down the sides of the bowl occasionally and beat until light and fluffy.

Pour the mixture onto some wax paper and roll into a log. Wrap in plastic wrap and refrigerate until ready to use.